Thanks to a good rally on Friday, New York Coffee Futures ended the week down just a penny when it looked a lot worse mid-week. GCA stocks were reported down about 4% for October end providing fundamental justification for Friday’s rally. Stepping back a bit, though, it does appear that the downtrend that we can say is two years old appears intact despite the market holding the key $1.00 level two months ago….the rally and subsequent fall since then looks a lot like the action we experienced in July of 2017: 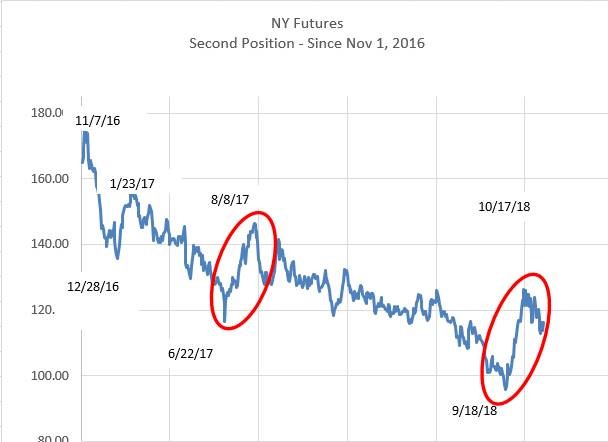 We’ve just completed the record Brazil harvest and early indications are that the prospects for next year’s crop based on rainfall/flowering are good…the anticipated off-cycle may not be as drastic as one might expect. Of course, still very early and we don’t know yet about fruit maturation. The world’s second largest producer, Vietnam, is also coming off a record crop last year while reports suggest that the upcoming crop could be even larger. If demand is such that consuming stocks continue to fall into
the teeth of all that coffee, then the bulls will be on to something, but I would have to see the drop in this month’s GCA stocks become more of a trend to be convinced. But it must also be said that higher-end coffees, whose producers are not benefiting so much from weak currency like Brazil’s, will be in high demand and so could command relatively higher prices going forward.

The shipping delays in Brazil are, well, improving though it may still take a month to get a vessel even now. Now our concerns are focused more on Colombia where negotiations with truckers continue but a strike is threatened if progress is not made by this coming Friday, Nov 23.

We’re excited to offer up some fine coffees for your consideration including East African Milds (Yirgs, and just-arrived Kenyas), Tarrazus, Antiguas, Colombians, and also a box of polished robustas. Sumatras and Papua New Guineas are just shipping so we’ll have to be patient on those (I confess that patience is not exactly my strong suit but I’m working on it).

Stay in touch and a Happy Thanksgiving to all.

At Armenia Coffee Corporation, it is our mission to satisfy all of the needs of our customers. As such, if you have any questions or concerns, please call us today.

Security Policy
Your payment and personal information is always safe. Our Secure Sockets Layer (SSL) software is the industry standard and among the best software available today for secure commerce transactions. It encrypts all of your personal information, including credit card number, name, and address, so that it cannot be read over the internet.

Refund Policy
All payments are final and no refunds will be processed.

Shipping Policy
All items will ship within 2 business day of the order being placed.